Cleric Qadri to RT: 'I’m here to empower the people of Pakistan' 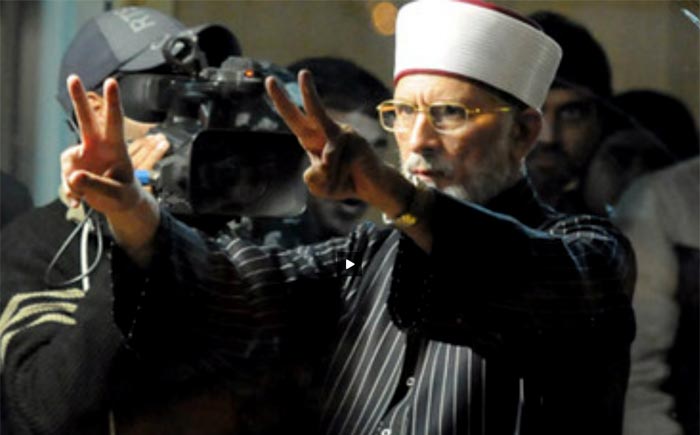 The government of Pakistan is so corrupt that it has no means to ensure democratic processes, cleric Muhammad Tahir-ul-Qadri has told RT in an exclusive interview, urging reforms to "put the country on the right track."

RT: Do you think the march will derail democracy in Pakistan, especially if the general election takes place within the next few months?

Cleric Muhammad Tahir-ul-Qadri: Democracy is not going to be derailed. It has already been derailed by corrupt political leaders. We want to put democracy on the right track. And we want to put democracy in place in its true letter and spirit. We don’t want any kind of delay in elections. The electorate reforms which I have suggested, they are already mentioned in the constitution of Pakistan. All the details which I am demanding are already there in the law, constitution and electoral laws.

And the whole thing, my electorate reforms agenda has been endorsed by the supreme court of Pakistan in its judgment which was issued on the 8 June 2012. This year we just have to enforce these articles of the constitution and sections of electoral law and the judgment of the Supreme Court. It will not take more than a month to implement and we still have three months of caretaker government. So there is no chance of derailing democracy. Elections can take place on time.

RT: You have accused the political leaders of Pakistan of corruption and other crimes. What do you expect to change?

MQ: First of all, let me substantiate what I had stated. The majority of these people are corrupt. There is a department of the government, National Accountability Bureau (NAB), and its chairman retired Admiral Fasih Bokhari is appointed by the president of Pakistan, Mr. Zardari himself. He has stated in his press conference and he has said in his official NAB statement that five thousand million rupees per annum are going to corruption. So these are the affectionate figures given by the government department. And at the same time it is declared and it’s not denied that seventy percent of members of Parliament in Pakistan are tax evaders. They do not bother to file tax returns. They conceal their source of income. So the corruption, there is nobody that can deny this reality. 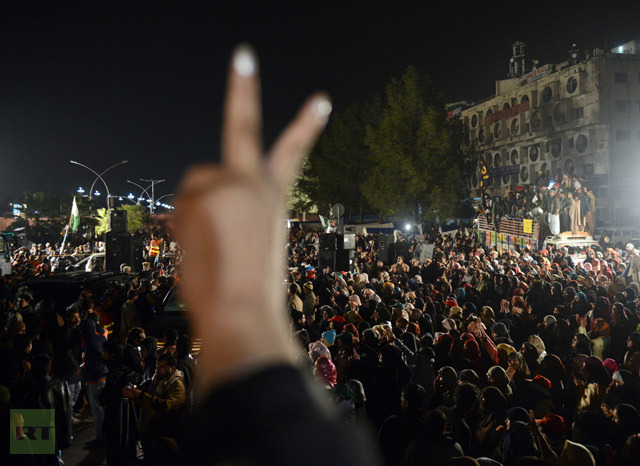 Supporters of Pakistani Muslim cleric Tahir-ul Qadri flash the V-sign as they celebrate the victory of a demand for electoral reform at a protest rally in Islamabad on January 17, 2013. (AFP Photo/Asif Hassan)

MQ: I do not think that somebody else will gain, because somebody else has no intention to take over power. They have lost a lot of their reputation because of past experiences and they, in fact, are not specialists at controlling civil society. They have not been trained for it. 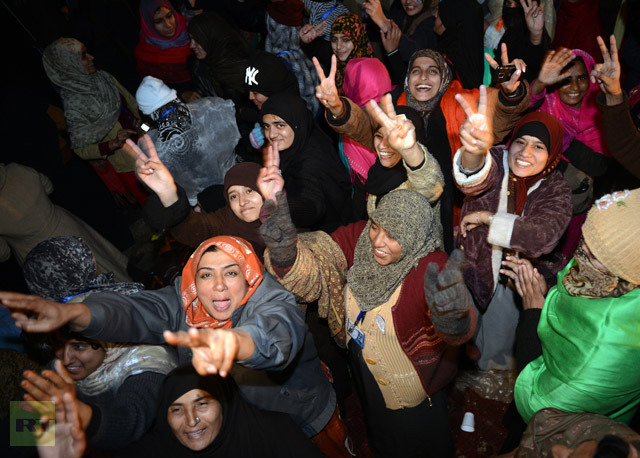 When I say a revolution, you should keep in your mind in Egypt, in Tunis, in Libya and all these countries, there was a military dictatorship for years and years, for a really long time and the people stood up against that. In Iran, it was the monarchical rule of the Shah, people stood up against that. Pakistan’s case is a little bit different, there is neither monarchical rule or a military dictatorship.

Here it’s electoral authoritarianism. A dictatorship-democracy as far as the term exists. There’re political parties and they manipulate the elections to come back into parliament every five years. But true democracy does not exist in this society, neither in the political field, neither in social field, nor economic field. No democracy. The people are not in fact participating in the real process of democracy. They are not getting a job, they are not getting the rule of law. They are not getting protection of their life. There is no protection for their wealth and business. There are targeted killings. People are being kidnapped.

You know in the last four days, 125 dead bodies have been sitting there without a burial. No state minister was there, no provincial government was there, no members of the assembly was there. Even the Prime Minister arrived there, four days later. So there is lawlessness, total chaos and anarchy in this country. Government is totally dysfunctional.

So, this is the single nation, single country in the whole Muslim world having nuclear capability and if the same situation continues, that would be a very big disaster if we collapse. So we have to put democracy on the right track. We have to stabilize society on true basis of constitution and law. This is what this movement is for.

RT: Don’t you feel that if force is used, a lot of innocent lives could be sacrificed?

RT: But what if they used the force?

RT: There are a lot of question marks on how you fund your campaign and this march in particular. Do you receive any foreign aid or funds?

RT: It is an open secret that the Americans and some western powers, have a role in shaping the political events and scenarios in Pakistan. How do you see their role and what is your strategy towards these Americans and these Western powers?

MQ: This is because of this incompetent political leadership. If you have a competent leadership who fixes and prescribes and who knows that what are our supreme national interests and then it develops or formulates as foreign policy, exactly on the basis of our own national interest. Nobody in this world whether America or any other country is your permanent friend nor your permanent enemy. We don’t want to become the enemy of other countries and we don’t want other countries, including America to be our enemies. We want a fair, friendly relationship with them but at the same time, we want to safeguard our national interests. We want to become a peaceful country. We want to protect our neighbors and region and we want to participate in the development of peace for the whole world.

RT: Some accuse you of pursuing a foreign agenda that you’re trying to implement here in Pakistan. How do you respond to these accusations?

And this time, rising up and standing up for change and democratic revolution, it is the best time, because we do not want to disturb the political mandate of the current rulers. They got their five year term and we wanted them to complete their term. Now their term is up, almost complete. The elections are due in March, do you understand, their term is coming to an end. So without disturbing their term, we gave them time to deliver, if they could deliver anything, but they could not deliver to the people.

So this is the best time to bring in electoral reforms before we enter the process of elections. If the elections take place according to the same corrupt practices and the same corrupt traditions as has been taken place throughout the history, it means the same corrupt people, with fake degrees, the law breakers, corrupt people, tax evaders like the PM, who’s arrest has been ordered by the Supreme Court, these terrible people will once again be in parliament and they will ruin this country for the next five years. So I think this time, is the best time to bring electoral reforms and then elections should take place within the time given by the constitution without any delay.

RT: Do you have any political ambitions?

MQ: I’m not here to empower myself, I’m here to empower the people of Pakistan. I’ve already declared that I’m not a candidate to become caretaker Prime Minister, absolutely not.