The government of Pakistan is unable to tackle the issue of terrorism effectively: Dr Tahir-ul-Qadri speaks to CNN 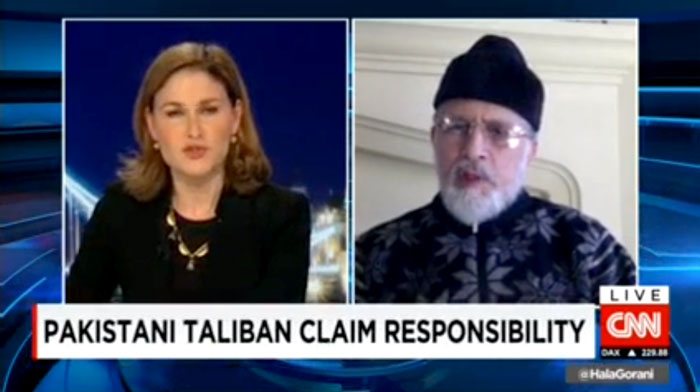 Q: Sir you reaction to tragic event in Peshawar?

A: It is definitely very big tragedy. I think it is the biggest tragedy in the history of terrorism in Pakistan and very unfortunate that the Government of Pakistan has been unable to tackle this issue of terrorism effectively.

A: Yes I do. The reason is that Government is confused. This is my assessment on this subject.

They lost eight to nine very precious months on dialogue with these Taliban who were committing brutality and terrorism and the most heinous crime against humankind and that was the proper time when the operation against terrorism would have been started but they provided them 8 to 9 months to get scattered, and to go to their safe havens. They were scattered. They got their security places and after 8 to 9 months, this operation that military of Pakistan started was commenced.

Still there are religious parties, political parties in the government, federal government, and their allies who still say that this war of terror is not our war. I was listening to Pakistan TV just an hour before and a religious parties’ heads were being intervened and still today they were, after condemning this incident, saying that we have to sit down and decide whether the use of force to eliminate this terrorism is right or wrong. So they still believe in it.

Q: If you are now in power what would you do right this day this minute to confront this problem?

Q: What countries are you refereeing to specifically?

A: You know much better than me there are countries that are funding the terrorists and this terrorism does not come up just in a day. It starts from narrow thinking of religion; starts from extremism and then finally it turns up into the terrorism. So the question is: who is addressing this basic root-cause, ideological root-cause of extremism? Extremism still exist there in religious field. No review of syllabi has been done in Pakistan. There is not a single chapter in any book right at the primary level up to the university level, which may teach the student about peace, about tolerance and about humanity.

Q: Which countries do you think are funding these groups like the Taliban in Pakistan?

A: I would say those countries who are very close friends of USA and British and the western people and the government. They are committing dual kind of policies. On the one hand, they are fighting war on terror. On the other hand, they are very close friend to those countries whom they very well know. They are providing them ideological support and financial support and getting everything from them.

Q: You are an opposition and critic of the Government but there is also warrant out for your arrest by the anti-terrorism court in Pakistan when you go back to Pakistan what is your expectation as to what will happen?

A: Warrants of arrest have been issued. Why? Because on 17th of June, for 12 hours the Government of Punjab through the police, those were on official dress. They fired on my house, on my secretariat, on my unarmed peaceful workers and killed 14 people including two ladies and 90 people seriously injured. Since FIR was not lodged and we had a march to Islamabad and just FIR was lodged after so much pressure. And up till today no police officer, no minister and no conspirator have been arrested. Since I am asking for justice, that’s why the warrant of arrest against us in Pakistan, the warrants of arrest are for peaceful people and not for the terrorists. Thousands of terrorists were arrested but none of them has been hanged. None of them has been punished. All of them have been bailed out.