PAT takes to the road against terrorism 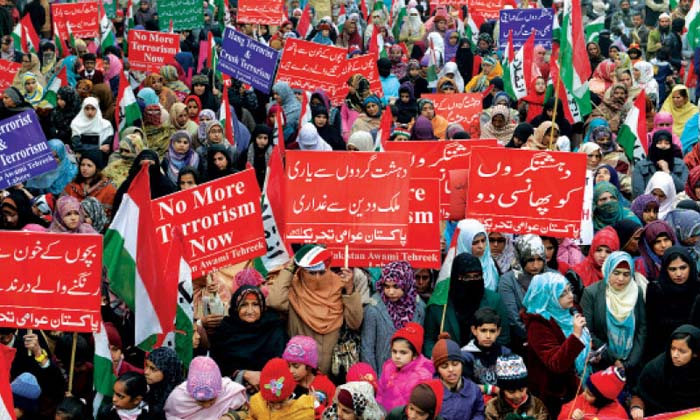 LAHORE: The Pakistan Awami Tehreek (PAT) on Sunday held rallies in 60 towns across the country against the Peshawar tragedy. In Lahore, participants of the rally marched from Regal Chowk to Charing Cross on The Mall and shouted slogans against terrorists. The rally was addressed by PAT chief Dr Tahirul Qadri through a video link from the US.

He said intellectual supporters of terrorists must decide whether they were with the nation or militants. He urged the masses to boycott those who had given statements in favour of extremists. He also said if policy-makers were serious about eliminating terrorism they should act upon the 14 points he had announced a day earlier for the purpose.

PAT President Raheeq Abbasi warned that if the war against militants was abandoned the very foundation of the country would be at stake.

He said for the first time the war against terrorism had been launched by the masses and it would help steer it to its logical end.

Criticising Interior Minister Chaudhry Nisar for not naming and condemning the Tehreek-i-Taliban Pakistan, Abbasi said one must not expect an active role from the minister who could not arrest a “pro-Taliban cleric” in the federal capital.

“Such a minister at this crucial juncture in the war against terrorism could be dangerous,” he said.