PAT chief Dr Muhammad Tahir-ul-Qadri has said that the government is deceiving people on the issue of terrorism. He said that funds have continued to be received from abroad in the name of elimination of terrorism and the past governments were also involved in this practice. He said that the French President and the whole cabinet led a rally of four million people against terrorism, asking when the honour of Pakistan’s Prime Minister will wake. He said why did the Prime Minister not appeal to the nation to take to the streets after Peshawar tragedy and why did he not invite the heads of Muslim countries?

Dr Tahir-ul-Qadri expressed these views while talking to SAMA television yesterday. He said that no other party except PAT took out rallies against terrorism. He said that there is a need to bring about changes in syllabi of schools, universities and religious seminaries. He said that the provincial ministers delivered speeches in Punjab Assembly in praise of police that killed 14 innocent people, adding that Dr Tauqir Shah, central character of Model tragedy, is being posted as ambassador in WTO as a reward for his ‘services’ in Model Town case. He said that this decision has proved that even the Prime Minister was also among the planners of the tragedy.

Dr Qadri said that religious seminaries that take foreign funding should be banned. He said that we would soon give a gift of newly prepared syllabus to people of Pakistan that would be taught in national peace centres being established under the banner of PAT, adding that this will play a key role in promoting peace.

The PAT chief said that majority of terrorists hanged so far had been condemned in the Musharraf assassination case. He asked when will those who killed thousands of citizens be hanged? He asked the Prime Minister to answer three of his questions namely (1) why is the report of judicial tribunal not being made public?; (2) Why is government afraid of constitution of neutral and bipartisan Joint Investigation Team?; (3) In return for which services is Dr Tauqir Shah being appointed ambassador in WTO? He said that things are positive so far as passage of constitutional amendment and establishment of military courts is concerned, adding in the same breath that political drama has started to be enacted in the name of terrorism. He demanded that the Model Town tragedy should be transferred to the military court, saying that we do not expect any justice from the current rulers. 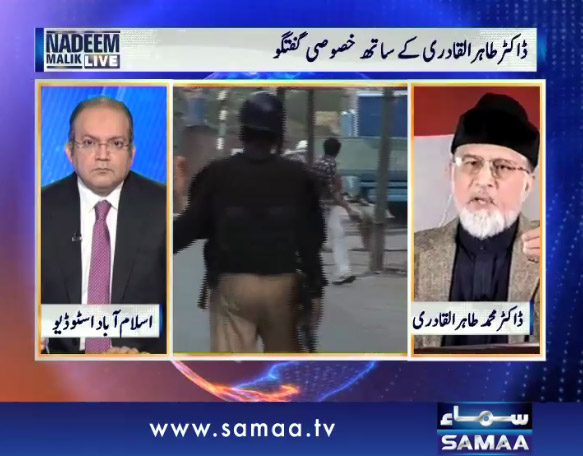