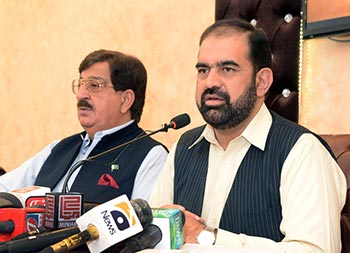 PAT President Dr Raheeq Ahmad Abbasi has issued a fact sheet on the completion of two years’ time by the PML-N government. He said that the PML-N made four big promises with the nation during the election campaign, which included end of load-shedding, retrieval of looted wealth from foreign banks, revival of economy, and provision of immediate and affordable justice.

According the fact sheet, the electricity shortfall in the month of May 2013 was 5000 MW whereas there was a daily load-shedding of 16 to 17 hours. After the lapse of two years since the coming of the PML-N government, the duration of load-shedding as well as the electricity shortfall remains the same as it was two years ago. It means that the government has completely failed in reducing the load-shedding in two years. The plan of checking incidence of theft, reducing line losses, paying circular debt, improving collection of arrears and better load management prepared by the government has miserably failed. Now the government is acting upon the IMF’s agenda of privatizing the power distribution companies, an agenda which has vehemently been rejected by the political parties and the Wapda employees.

Dr Raheeq Abbasi said that as far as the promise of brining the foreign money back home is concerned, the less said the better as it proved to be one of the baits thrown in to fetch votes. Startling revelation of $100 dollars of Pakistani politicians and members of the ruling elite lying abroad in the Swiss banks has been made. According to some reports, the figure of looted wealth is close to $200 billion. Despite passage of two years, the present rulers have not been able to bring back even two dollars. The announcement of dragging Asif Ali Zardari on the streets of Lahore and Larkana and bringing the looted wealth back to Pakistan was made during the election campaign but the interesting thing is that a Swiss court gave a ruling in favour of the Government of Pakistan regarding a diamond necklace owned by Asif Zardari and Benazir Bhutto. It has been more than one and half year, the government has not even contacted the Swiss authorities to get precious necklace back. It may be pertinent to mention that the case about the necklace was filed during the last government of Nawaz Sharif. It is a matter of serious concern that the government is keeping mum despite the court decision in its favour.

According to the PAT President, the third promise pertained to revival of ailing economy. The facts are on record that the present rulers set up records of getting new foreign loans and paying interest money. In 2013, every Pakistani citizen was indebted to the tune of Rs. 72000 and now the figure of per capita debt has increased to about Rs. 100,000 in 2015. It is the IMF, which is preparing the second budget of the government. The previous government took a foreign loan to the tune of Rs. 11000 billion in five years, whereas the present government has taken a loan of Rs. 5500 billion in first two years of its five-year term, whereas it has already signed an agreement with IMF to take a loan of Rs. 11000 billion. The Sharif government has established a new record of getting domestic loans from local banks to the tune of Rs. 2000 billion during two years. The claims of making economy stand on its feet and become sustainable are imaginative and deceptive. Practically speaking, Pakistan is getting bogged down in foreign debt and interest. The Government has failed to achieve any of the economic targets it fixed in first two years of its tenure.

The fact sheet maintained that the performance of Federal Board of Revenue in tax collection has been disappointing to say the least and consequently, dependence of the government on foreign loans has increased manifold. Against the GDP target of 5.1%, only 4.1% could be achieved. The growth rate of agriculture, which is the backbone of national economy, was set at 3%, which registered a growth rate of 2.88%. The growth target of industrial sector was fixed to be 6.8%, which turned out to be 3.95%. In the same way, the target of reducing the fiscal deficit could not be achieved. Unemployment increased in the country due to poor and disappointment performance of agricultural and industrial sectors. Particularly, the working class and labourers were badly affected due to ongoing energy crisis. The prices of edibles and other items have been on an upward trajectory since 2013 and there has been no looking back since then. The dearness mafia has been provided a license to indulge in fleecing the people through hike in the prices of POL products before the beginning of the holy month of Ramzan. The prices of POL products decreased in the international market while its benefits were not passed on to the people and the industry in the real sense. The GST on the petroleum products was increased from 17% to 34% and with imposition of 2% regulatory duty, it would be 36% for all intents and purposes.

According to the fact sheet, the prices of POL products are at the level of 2008 today, whereas the price hike of edibles and other items has registered 100% compared to 2008. The mega scandals of corruption also surfaced in these two years. The rulers remained silent on Rs. 134 billion scam involving sale of petrol. The masses were looted with both hands through artificial petrol shortage but the real characters remained safe and secure. The prevalent rules and regulations were violated at the time of payment of circular debt to the tune of whopping Rs. 500 billion and the government failed to satisfy the people in this respect. The federal government is silent on financial irregularities of Rs. 17 billion in Nandipur Power Project despite taking notice of that.

The PILDAT report issued on April 08, 2015 revealed that $15 billion are squandered away in corruption every year. The Auditor General in his report on March 11, 2015 has indicated that there is a massive corruption in the government departments. The officers are reluctant to hold monthly audit meetings. The FBR revealed in a report issued this year that Rs. 200 trillion are wasted in the form of corruption every year. NAB received 20,000 complaints of corruption in a span of 12 months from January 2014 to December 2014, which is a record in itself and a proof of the fact that corruption increased manifold in these two years. The government has not been found to be serious in detecting and tackling corruption.

First two years of the Sharif government have proven to be worse in Pakistan’s history so far as political and democratic freedoms are concerned. Nowhere even during the military regimes were political workers killed by straight firing at the hands of police. This heart-rending tragedy took place during incumbency of the Sharif government. More than 25000 PAT workers were arrested in mass hunt across the country. The containers were placed across Punjab to stop the PAT activists from attending Martyrs’ Day ceremony in Lahore. The state hooliganism was on full display during the intervening night between August 30 and 31, 2014. The political workers were never maltreated in our national history in last six decades as was done during the tenure of the present government.

The government played a negative role in thwarting the National Action Plan. The judicial inquiry into the Army Public School massacre has not been conducted to date. The military courts are not being allowed to function. The 70% part of 20-point National Action Plan has yet to be implemented. No concrete action has been taken to stop foreign funding and undertake registration of religious seminaries. So far as governance and transparency are concerned, the former Governor Punjab, who was representative of the federal government, issued a charge sheet against the provincial government at the time of tendering his resignation citing rampancy of corruption, lawlessness, and violation of fundamental rights of the masses as the factors responsible for his resignation. It was the responsibility of the federal government to hold an investigation into these charges. It could have constituted a high-powered commission to probe these issues but it turned a blind eye to the matter, which is akin to accepting the allegations at their face value.

So far as provision of immediate and affordable justice at the doorstep of the people is concerned, the practical manifestation of this claim by the government can be seen in case of the Model Town tragedy. The Punjab government constituted a judicial commission to probe the Model Town tragedy. Hardly had the commission started its work that it was robbed of its powers. Then the rulers have been sitting on the report issued by the commission. A partisan JIT was constituted in which the principal accused were given a clean chit and Rana Sanaullah, one of key characters of Model Town tragedy, was inducted into the cabinet.