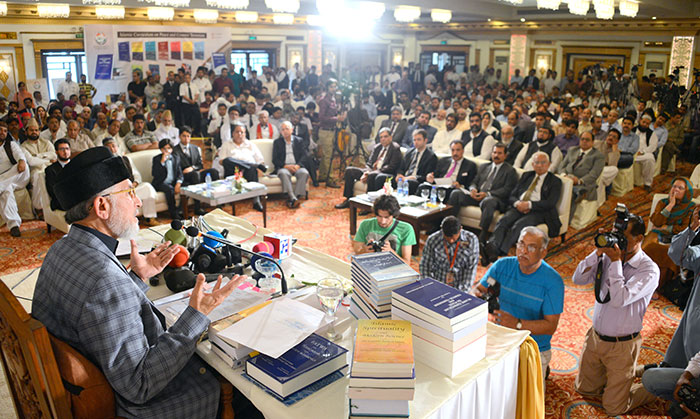 Addressing a ceremony held on July 29 in Islamabad to launch peace curriculum on peace and counter-terrorism consisting of 25 books, PAT Chairman Dr Muhammad Tahir-ul-Qadri has said that terrorism is not only the biggest threat to the Muslim world but also to the whole humanity. He said that the terrorists defamed Islam for their financial interests and acquisition of power. He said that the terrorists are given funds of billions of rupees to spread mayhem and chaos, adding that the funds trails continue to remain hot even today, which is unfortunate. ‘I say this with full responsibility that education imparted by religious seminaries spanning over ten to twelve years does not have even a single chapter teaching elimination of terrorism and promotion of peace,’ he said.

Dr Tahir-ul-Qadri offered that his name as the author of the peace books may be deleted but the peace curriculum designed in the light of the Holy Qur’an and Sunna should be fully benefitted from. Expressing his dismay over the pace of progress on the implementation of the National Action Plan (NAP), he said that 19 out of 20 provisions of the NAP have not been translated into reality. He said the military courts had hardly handed down just one judgment that their working was stayed. He asked whether any stay order was ever passed against any other amendment.

Throwing light on the causes responsible for spawning terrorism, Dr Tahir-ul-Qadri said that as long as the environment of schools, colleges and religious seminaries is not marked by peacefulness; socio-economic disparity is not eliminated; basic facilities such as education, health and employment are not provided; social and legal justice is not administered; terrorism and extremism will continue to rear its head as a reaction. 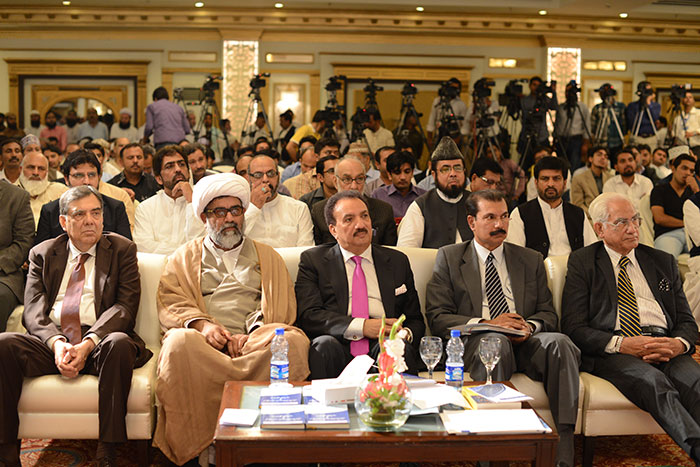 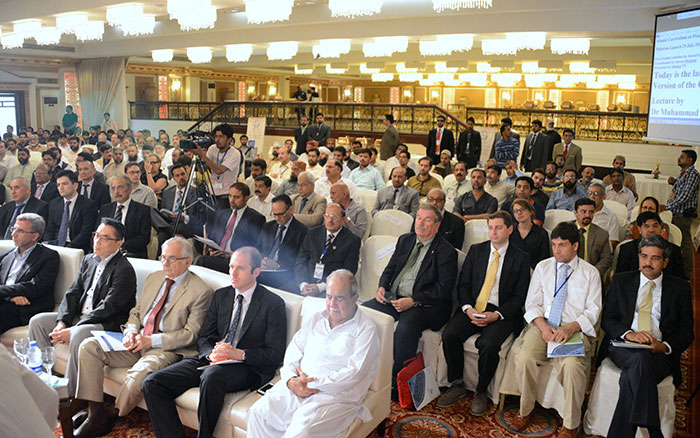 The PAT leader cited a Hadith whereby the Holy Prophet (SAW) said that the ‘Kalma’ reciters and those using the name of Islam will shed the blood of innocent people, spread mischief and chaos and if he (SAW) found them during his period he would eliminate them. He said that the officers and jawans taking part in the Operation Zarb-e-Azb deserve to be congratulated, for they are fighting the mischief of ‘Khawarij’ according to the command of the Holy Prophet (SAW). He said that foreign funding coming into Pakistan in the name of democracy and Sharia is destroying Pakistan, adding that those taking the foreign funding should be hanged. He said that the government’s attitude vis-à-vis war against terrorism and implementation of the NAP lacks seriousness, which is deplorable. He said that the government is somehow giving the impression as if it is the military’s war alone.

Dr Tahir-ul-Qadri said that the military operation is merely one aspect of the campaign to eliminate terrorists. He said that unless justice is provided and socio-economic disparity is bridged, the war against terrorism cannot be won comprehensively and fully. Taling about the Model Town tragedy, he asked as to what is the reason that the report of the Judicial Commission probing rigging charges was released, whereas that of the Model Town tragedy was hushed up. ‘How can there be peace and justice in the country in the presence of these conscienceless and oppressive rulers,’ he stated.

The PAT chief said that when he went abroad for medical treatment, these rulers spread the rumours of a deal. He said what to speak of him or his organization, these rulers cannot even buy the conscience of any of his poor workers or a member of the martyrs’ family or even his body guards. He said that 25 books written as part of peace curriculum are in English, Arabic and Urdu languages. He said that there are five books out of these which every segment of the society can benefit from in equal measure. 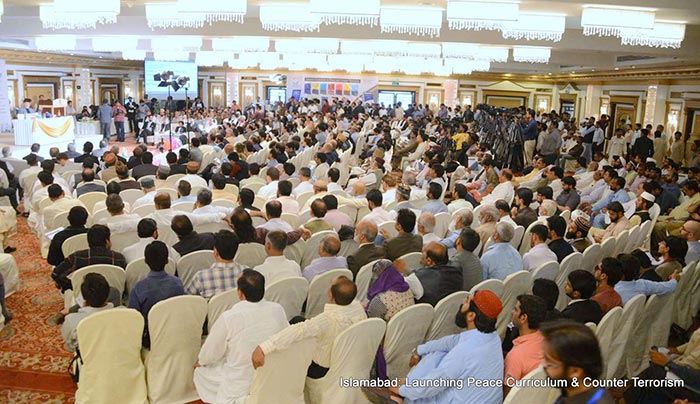 Speaking on the occasion, Allama Raja Nasir Abbas said that the Operation Zarb-e-Azb is justified in every respect of law, constitution, and morality. He said that defeating the ideology of terrorists along with their physical elimination is equally important in winning this battle of the country’s survival. He said that Dr Tahir-ul-Qadri has done a great service to Pakistan, Islam and humanity by designing Islamic curriculum on peace and counter-terrorism on the front of ideology.

Senator Rehman Malik presented a resolution in the ceremony, which demanded that the Judicial Commission’s report on the Model Town tragedy should be made public. He also promised to raise the issue of releasing the report in the Senate in addition to introducing a bill there for enforcement of peace curriculum at the official level in the country. He said that Dr Tahir-ul-Qadri has rendered a great service to the nation by painstakingly preparing peace curriculum. 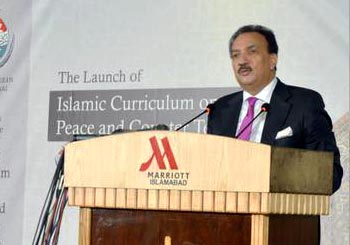 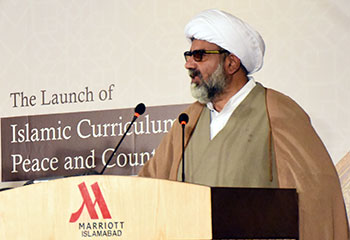 Air Marshal (r ) Shahid Latif said that injustice and oppression lead to extremist and radical attitudes. He said that non-provision of justice to the martyrs of Model Town tragedy is the biggest injustice committed against them. He said that when oppression is committed at the state level with no redressal for the wrongs so inflicted on innocent people, nothing can stop the societies from being torn apart from inside.

Former Ambassador Ashraf Jahngir Qazi said in his speech that Dr Tahir-ul-Qadri is an erudite scholar and designing of peace curriculum is his greatest religious, national service. He said that he would ask Dr Tahir-ul-Qadri to prepare such a draft of definition of term ‘terrorism’, which is both practicable and acceptable to the United Nations. He said that the whole world is confronted with the menace of terrorism and there is no consensual definition of the term. 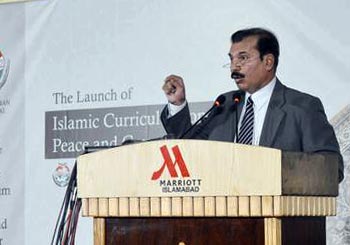 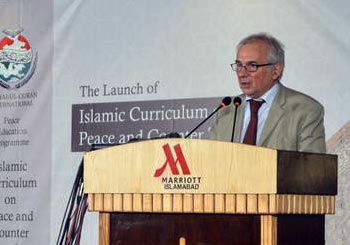 Giving his talk on the occasion, Sahibzada Qamar Sultan Ahmad congratulated Dr Tahir-ul-Qadri on behalf of ‘Khankah Sultan Baahoo’ on presenting Islamic curriculum on peace and counter-terrorism. Maulana Abdul Qavi, in his views, announced to teach the peace curriculum of Dr Tahir-ul-Qadri in over 500 religious seminaries in the country.

In his speech to the ceremony, renowned analyst Fawad Chaudhry said that truth, knowledge and Dr Tahir-ul-Qadri will turn out victors in the fight against terrorism. He said that Islamic curriculum for promotion of peace and elimination of terrorism is a great service to the religion and humanity.

Miss. Jennifer Jagjivan of Christian Study Centre (CSC) said in her talk that peace curriculum designed by Dr Tahir-ul-Qadri will strengthen the cause of interfaith dialogue. 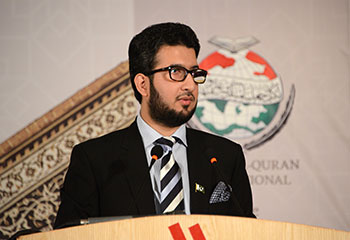 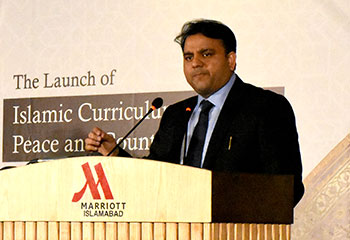 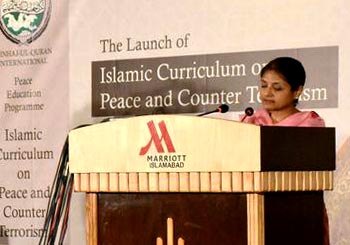 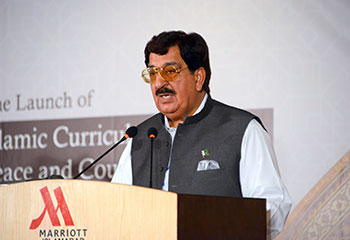 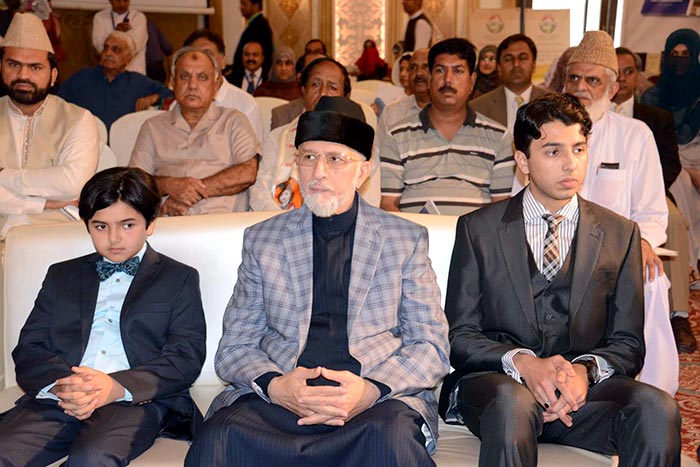 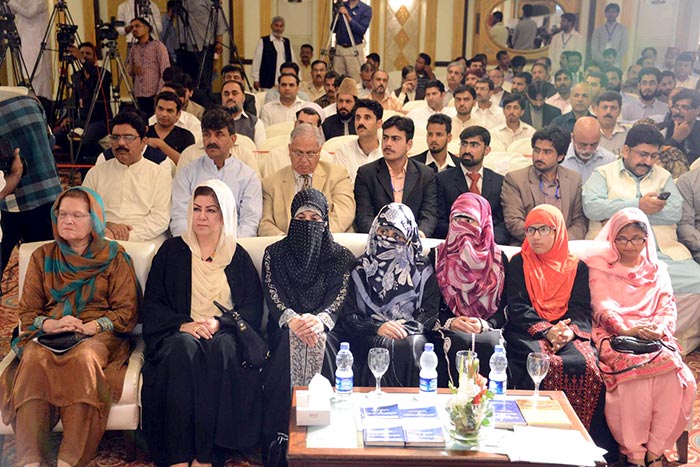 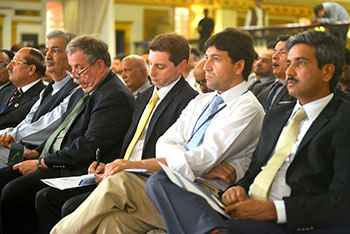 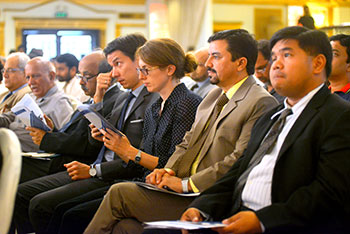 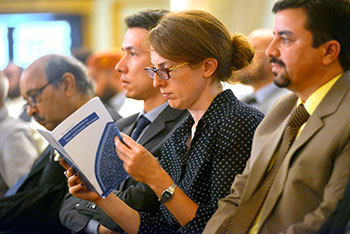 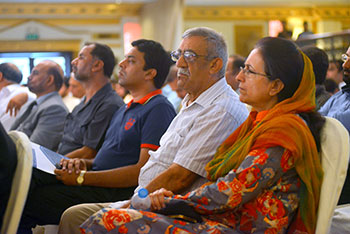 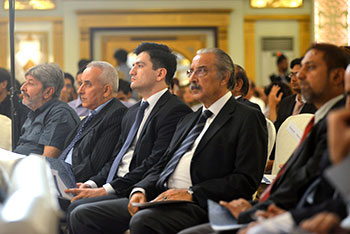 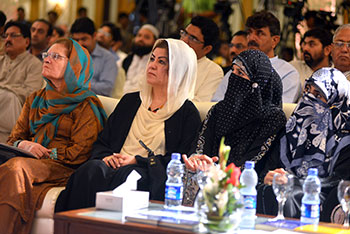 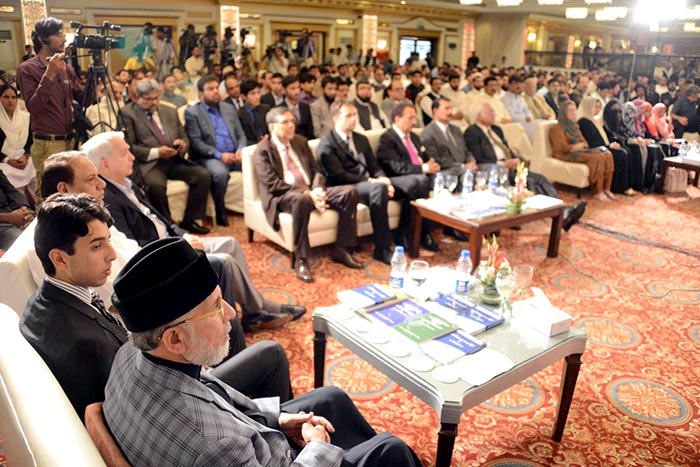 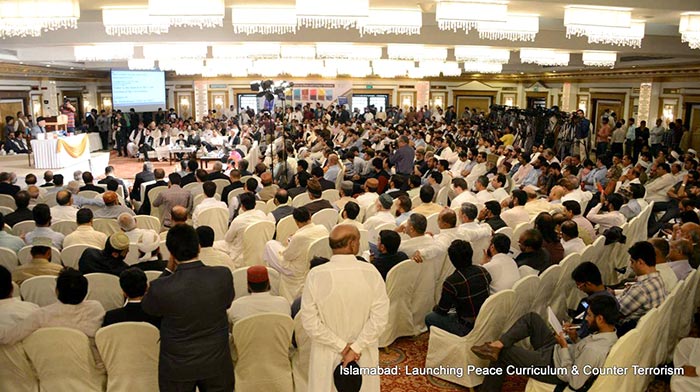 The #AntiTerrorCurriculum is an excellent initiative and society is in dire need of it. @fawadchaudhry pic.twitter.com/PvH78LvHA7

Jahangeer Ashraf Qazi: We need national discussions on eliminating terrorism in light of the #AntiTerrorCurriculum pic.twitter.com/NwbWag2NR4

Jenifer Jug Jiven: #AntiTerrorCurriculum is a gift of hope and encouragement for nations to move forward. pic.twitter.com/0UDrroHMif