A prestigious ceremony was held at the central secretariat of Pakistan Awami Tehreek on the occasion of the 68th Independence Day and the first anniversary of the revolution march on August 14. A large number of workers including women and children attended the ceremony. Cakes were cut and special prayers were made for peace, progress and stability of Pakistan on the occasion.

Addressing the gathering via telephone, Dr Tahir-ul-Qadri said that elimination of the system based on oppression is inevitable to get real independence. He said that the people wronged by the government staged a revolution march and a sit-in to get rid of corruption-ridden system one year ago. He said that our struggle continues, adding that we would not hesitate to offer any sacrifice for establishment of supremacy of the Constitution and empowerment of the masses.

Dr Qadri said that our workers revived the memory of the freedom struggle by embracing martyrdom for ridding Pakistan of corruption and exploitation. He said that our crusade against corruption, ignorance, poverty and terrorism will continue unabated. He said that we would not rest till every poor but capable Pakistani becomes master of his destiny, adding that such a day is not far away. He also paid his rich tributes to the officers and jawans of Pakistan military who are rendering sacrifices in the Operation Zarb-e-Azb.

After the flag hoisting ceremony in the central secretariat, a seminar was held in the conference hall on the subject of the first anniversary of revolution march and the 68th Independence Day. Addressing the seminar, Chief Coordinator PAT Major (r ) Muhammad Saeed said that Dr Tahir-ul-Qadri feels for every Pakistani and the poor masses. He said that no other leader of Pakistan took to the streets to articulate people’s problems as Dr Tahir-ul-Qadri has.

The proceedings of the seminar opened with recitation by Dr Tanvir Azam Sandhu, followed by Naat presented by Raja Nadeem. At the conclusion of the seminar, Bisma Amjad, daughter of Shaheed Tanzila Amjad, cut the cake marking the first anniversary of revolution march. Speaking on the occasion, she said that Dr Tahir-ul-Qadri is struggling for revolution and we are ready to offer any sacrifice for the lofty objectives. 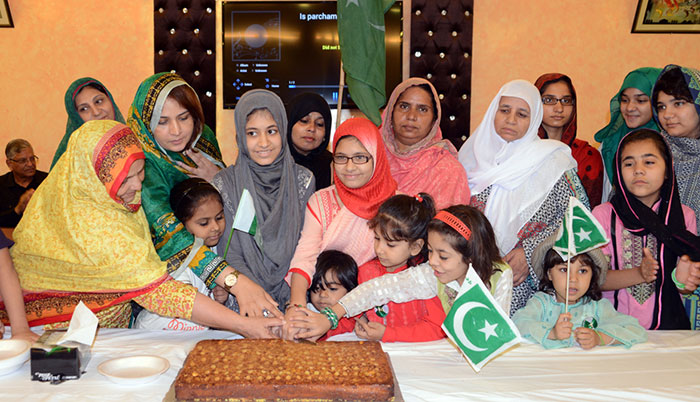