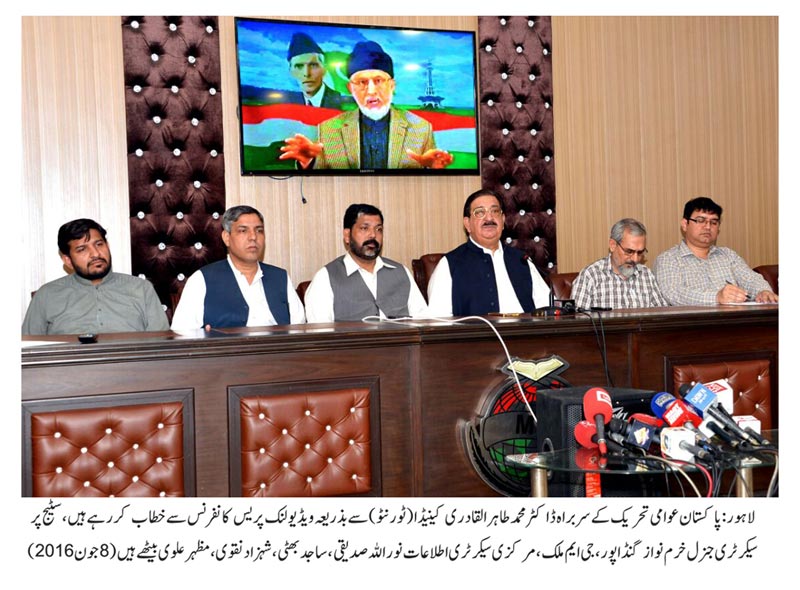 Addressing a press conference through a video link from Canada, Dr Tahir-ul-Qadri has announced the schedule of his return. He said that he would reach Lahore on the morning of June 15 and lead the sit-in on The Mall on June 17 to demand justice for martyrs of Model Town tragedy. He said that he is guarantor of peaceful protest and peaceful sit-in, adding that the government should refrain from its highhanded tactics. He said that the corrupt rulers would not be able to complete their term in office. He said that the dawn of hope is in sight. He said that we have extended invitation to the heads of all political parties to attend the protest slated for June 17. He said that he will announce his next line of action to seek justice at the time of the sit-in. He said he could not say for how long the protest will last.

Dr Tahir-ul-Qadri said that an attempt was made to kill justice in the name of framing ToRs. He asked the opposition to announce the scrapping of the parliamentary committee. He said that the people belonging to the government circles are saying that we would make an example out of Justice Baqar Najfi by meting out exemplary punishment. He further said that work continues on making the Model Town Judicial Commission report controversial.

The PAT Chairman said that it has been two years since we have been in search of justice but to no avail. He said that given this situation, we are left with no option but to stage peaceful protest. He said that we are not among those who take up arms to take revenge. He said that the past bears witness to our peacefulness, and compliance with the law of the land. He said that we are busy in fighting against terrorism at intellectual level but the rulers perpetrated violence on us and it is for this reason that we have been demanding justice for last two years.

Dr Qadri said that the police refused to register FIR during the sit-in despite the court order and the fact remains that the whole world saw these scenes of state terrorism on their TV screens for many hours. Despite this, we were kept deprived of the right to get FIR registered. He said that it was on the intervention of the Army Chief that the FIR was finally registered during the sit-in for which we are thankful to him. He, however, added in the same breath that the responsibility to get justice delivered to the oppressed is also on the shoulders of the Army Chief. He said that if he did not play his role in dispensation of justice to the aggrieved before his retirement, he will be answerable to Allah Almighty.

The PAT Chairman said that the mandate of elimination of terrorism in all forms and manifestations is with the armed forces of Pakistan under the National Action Plan. He said that act of terrorism was committed in Model town and it is COAS’ responsibility to ensure dispensation of justice. Dr Qadri paid rich tributes to the officers and jawans of the armed forces for their exemplary sacrifices in the Operation Zarb-e-Azb. He said that he is a palmist but the circumstances suggest that the present rulers will not be able to complete their term.

Talking about price hike, the PAT Chairman said that there is 200% increase in the prices of eatables since 2008 to date. Milk which cost Rs. 30 per kg has shot up to Rs. 80 per kg. He said that the prices of POL products have come down to the level of 2008 but price hike has not decreased. He said that farmers have been badly hit as agriculture suffered big time under the watch of the present government, so much so that they have had to stage protests and sit-in.

Dr Qadri said that the rulers have failed on every front and their further stay in power will be detrimental to interests of the masses. He said that there is no change in our stance on the Model Town tragedy. He said that we are determined to get justice for the martyrs, come what may.