PAT announces to field candidates for all LG constitutes

Khurram Nawaz Gandapur said the PPP gave tickets to the workers and farmers during the 1970s and got them elected to the national and provincial assemblies. He said the political parties demand millions of rupees from the candidates in the name of the party funds. He said the PAT is the only ideological party of Pakistan today that draws its strength from the workers. He asked the people to vote out the looters of national resources.

Mian Rehan Maqbool said in his speech that we welcome the announcement of the first phase of LG elections being held on proportional representation principle. He said we are fully geared up to take part in the polls.

Mian Murtaza Murtazai said that the solution to Pakistan’s problems lies in the reform agenda of Dr Tahir-ul-Qadri. Noorullah Siddiqui highlighted the importance of social media in communicating the reform agenda and vision of Dr Tahir-ul-Qadri to the people. He said as long as the current system stays intact, the crises are likely to persist. He said the anti-Pakistan forces are poisoning the minds of our youth through their surrogates.

Mian Kashif said in his speech that the PAT fully prepared for the LG polls. He said the provincial leadership of the party is touring every town and village. He said no other political party has the passion and vision of public service that the PAT workers possess.

Raja Zahid Mahmood said that the state of Medina came into being through sacrifice. He said the well-to-do individuals made the less privileged shareholder in their wealth. He said the policies of today are meant to fleece the poor. He asked those making claims of Raisat-e-Medina to protect the interests and the rights of the poor.

The cake marking the 69th birthday of Shaykh-ul-Islam was cut at the conclusion for the ceremony followed by Dua for peace and prosperity and the long life of Shaykh-ul-Islam. PAT Secretary Coordination Arif Chaudhry thanked all the participants. 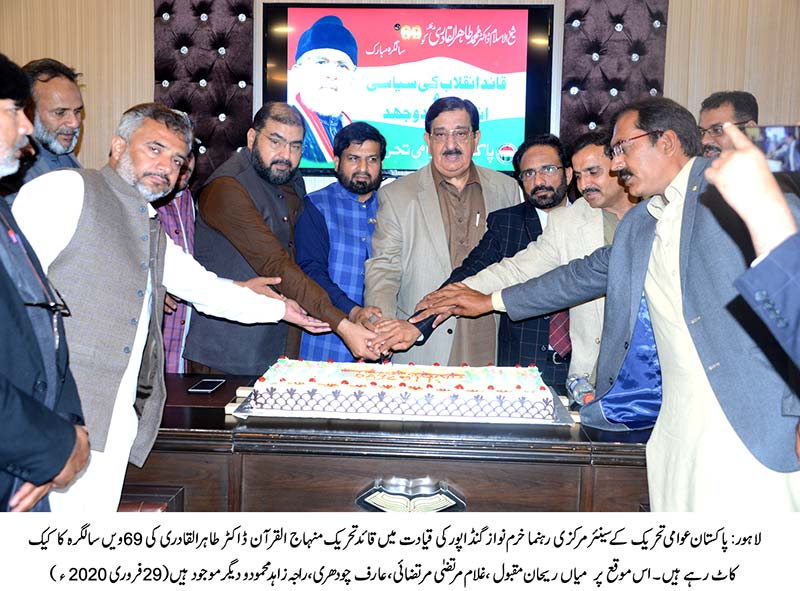