The medium and the message (The Express Tribune) 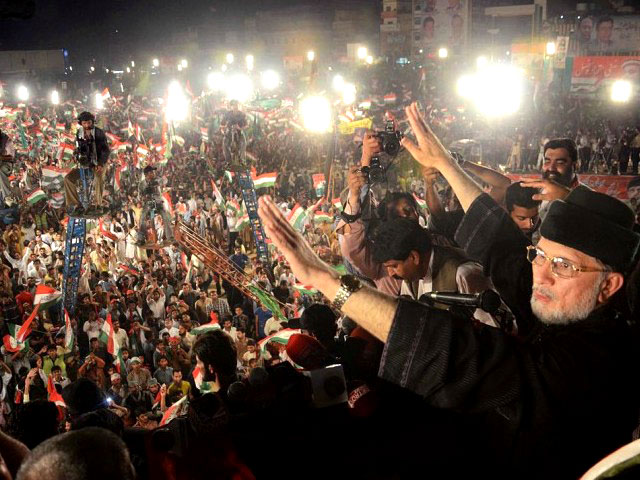 There is something almost McLuhan-esque about the slow-motion and now peripatetic ‘revolution’ that becomes more underwhelming by the day. Some life has been breathed into it by the rally held by the Pakistan Awami Tehreek in Faisalabad, and both the medium and the message are consistent with what has been reiterated countless times in Islamabad over the last 60 days. Dr Tahirul Qadri has asked his followers to donate support — which they did in their many thousands — notes, as in cash, and votes, as in mainstream democratic process.

While the two main protagonists of the protest movement may want people to ‘snatch power’ from their rulers, the people in reality, so far, have not yet reached that point, although the underlying message of the movement has clearly garnered support in a significant section of the population. Both Imran Khan and Dr Qadri are delivering over and over again, a message that has undoubtedly struck innumerable chords; chords which are currently dissonant and have yet to be arranged into the crotchets and minims and quavers that when sung together sound the symphony of change.

The exposure that the message has got via the media has ensured that it is now firmly embedded in the national subconscious. There is a gradual but perceptible awakening, a stirring of the bones as the message massages long-inert sections of the population. Never mind that Dr Qadri’s understanding of the workings of international financing does not seem very profound, he is bang on target when he says that a majority of people — and here he means poor people — are unhappy with lawlessness, sectarian and terrorist violence and religious intolerance. A majority of the people of Pakistan are poor, and it is to them that he speaks directly. He has asked for their vote, and given the chance, they may well give it to him. Our rulers need to realise that there is a reason why the protest movement has caught such mass attention from the people and the media. They will do well to focus on the problem areas that Dr Qadri pointed out in his speech instead of dismissing the protest movement as being a conspiracy against them.