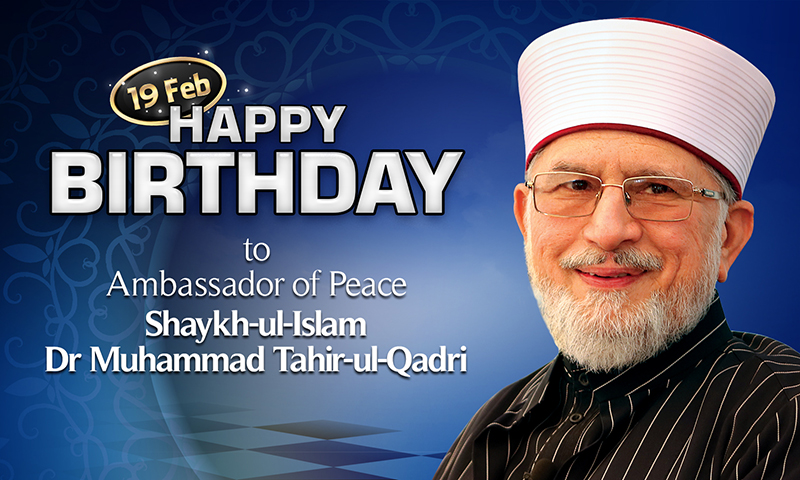 The 67th birthday of PAT Chairman Dr Muhammad Tahir-ul-Qadri is being celebrated today (Feb 19). Special ceremonies and seminars are being held across Pakistan as well as in 100 Islamic Centres around the world in which tributes are being paid to Dr Tahir-ul-Qadri on his diverse services. The central ceremony in this regard will take place at the central secretariat of PAT today.

The distinguished personalities belonging to various walks of life including politics, sports, showbiz have congratulated Dr Qadri on his 67th birthday.

In his written message, Mr. Zwelivelile Mandlesizwe Dalibhunga Mandela, the grandson of iconic antiapartheid South African leader Nelson Mandela, said that he was a witness that Dr Tahir-ul-Qadri was rendering exemplary services to promote love, peace, education and moderation from the platform of MQI.

PTI Chairman Imran Khan stated in his congratulatory message that Dr Tahir-ul-Qadri is an educated, and compassionate personality who feels for others. He said that he holds his scholarly and welfare work in high esteem and prays for his long life.

In his message of greetings, former President and Co-Chairman of PPP Asif Ali Zardari said that Dr Tahir-ul-Qadri is a self-made man who showed the peaceful face of Islam to the world and foiled efforts to lump Islam with extremism. He said that he offered a counter-narrative to terrorism and militancy on which every citizen of Pakistan is proud.

PPP Chairman Bilawal Bhutto-Zardari said in his congratulatory message that his mother and former PM Shaheed Benazir Bhutto knew Dr Tahir-ul-Qadri very well and held several meetings with him. He said that she was a life-member of MQI. He said that there is no doubt about the fact that Dr Tahir-ul-Qadri exposed the mischief of terrorism and extremism very wisely and by employing the best of arguments, analysis and scholarship at his command.

PML-Q President Chaudhry Shujaat Hussain said that Dr Tahir-ul-Qadri made politics the means of worship and service of the masses. He said that he is educating the youth on the right path, stating that we greatly respect and value him. He prayed to Allah Almighty to give long life to Dr Tahir-ul-Qadri.

Ameer-e-Jamaat Islami Siraj-ul-Haq said that Dr Tahir-ul-Qadri is an advocate for unity among Muslims, peace and interfaith dialogue and harmony. He said that he has engaged in a relentless struggle for promotion of welfare of humanity and moderation. He extended his best wishes and prayers to the PAT Chairman on his 67th birthday.

Awami Muslim League leader Sheikh Rashid Ahmad said that Allah Almighty endowed treasures of knowledge and wisdom on Dr Tahir-ul-Qadri. He said that the youth of today are readily accepting his message with open heart.

In his written message marking the birthday of Dr Tahir-ul-Qadri, Chief Minister Sindh Syed Murad Ali Shah said that the struggle of Dr Qadri is for moral, and spiritual training. He said that the establishment of Islamic educational centres in over 100 countries is a great feat.

Senior leader of MQM-Pakistan Dr Farooq Sattar said in his message that great scholarly work done by Dr Tahir-ul-Qadri in a short span of time will continue to guide and benefit the succeeding generations for a long time to come.

Allama Raja Nasir Abbas, the leader of Majlis-e-Wahdat-ul-Muslimeen, said in his message of greetings that the scholarly struggle waged by Dr Tahir-ul-Qadri is for the betterment of the whole humanity and his services are acknowledged globally.

Sunni Ittehad Council leader Sahibzada Hamid Raza said that we are proud that we are living in the times of Dr Tahir-ul-Qadri. Allama Muhammad Ajmal Qadri, patron of JUI, said that the mission of Dr Tahir-ul-Qadri and ours is to spread the message of the Holy Quran. President of Muslim Conference (Azad Kashmir) Sardar Ateeq Ahmad Khan said that he was already impressed by religious scholarship of Dr Tahir-ul-Qadri, stating that he is now enamoured of his political wisdom and statesmanship. He benefited the world with his pen and knowledge.