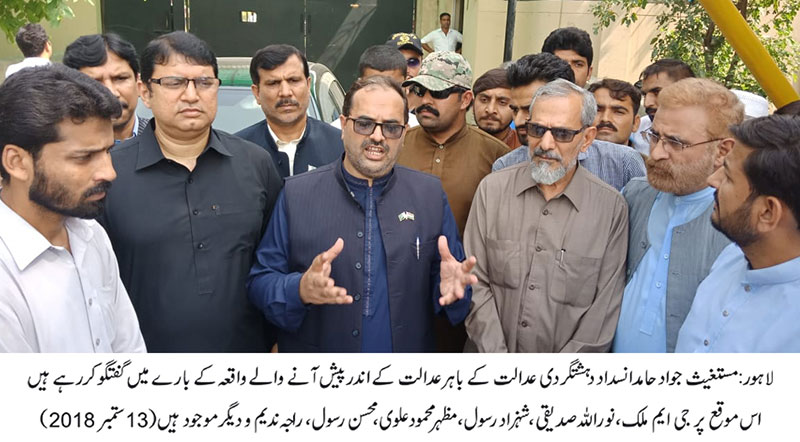 In a hearing of Model Town case in the anti-terrorism court yesterday, Nazim Awan Advocate, one of the lawyers representing the accused police officials, slapped Mohsin Rasool, an eye-witness of the tragedy and threatened of dire consequences. After the incident, complainant Jawad Hamid and the PAT lawyers submitted an application asking for an appropriate action against Nazim Awan Advocate. The judge of the ATC has been requested to revisit the incident of slapping by looking at the footage to see as to who committed an excess. It has been prayed in the application that security should be provided to the witnesses who are appearing before the court to record their statement during the cross-examination.

As soon as the news of the incident was out through media, the workers started gathering in the central secretariat and outside the antiterrorism court. A feeling of anxiety spread among the workers. Sensing the criticality of the situation, PAT Secretary General Khurram Nawaz Gandapur advised the workers to keep their calm and not take law in their hands. He said that we are the followers of a leader who has taught us to be peaceful even in the face of the worst provocation. He said that we would seek a legal redressal of the excess committed against one of our eye-witnesses.

The PAT Secretary General said that we informed the judge of the antiterrorism of the threatening attitude of the police officials and their attorneys several times, stating that the incident of slapping an eye-witness deserves to be condemned strongly and taken not of.

PAT Secretary Information Noorullah Siddiqi, while talking to media outside the premises of the antiterrorism court, stated that the PAT lawyers and witnesses are taking part in the legal proceedings peacefully for last four years and we want justice as per the law of the land. He said that the patience of the PAT workers should not be tested anymore. He informed that the meeting of the party’s Core Committee has been convened to deliberate upon the issue, stating that the PAT Chairman Dr Muhammad Tahir-ul-Qadri will address it through video-link.